This tour of the Aralsk town and the Aral area will allow the tour participants to feel the tragedy of the Aral Sea, which has shocked the whole world. The vast steppes under clear skies and the dome of the starry sky will give you unforgettable feeling. The silence of nature and sound of waves will relieve you from worldly problems and concerns.

The next stop is the boundless, untouched spaces of Mangystau. This is another world - mysterious and unknown. These lands are for connoisseurs of the present. The vastness of the steppes, fantastic landscapes, the interweaving of antiquity and modernity...

17:05 Transfer to airport to catch a flight to Kyzyl Orda

18.10 Arrival to Kyzyl Orda. Meeting with a driver at the airport and transfer to hotel. Check in. Dinner and overnight.

08.00 – Meeting with a driver and transfer to Aral tour via Korkyt Ata Memorial complex (470 km)

It’s a large memorial complex dedicated to the composer, philosopher, poet Korkyt-Ata who has also invented “Kobyz” Kazakh instrument in a form of violin. Korkyt-Ata who lived in VIII-IX centuries has completely devoted his life to searches of immortality of human soul. The Korkyt-Ata memorial was built in a place of mausoleum where philosopher Korkyt-Ata was buried and when music is played there, the sound resonates so that it can be heard equally from any part of the memorial. Large cultural events, musical festivals are hosted there.

14:00 - Arrival to Aral. Transfer for lunch. Time for rest at guesthouse. Dinner and overnight.

The last boats near Zhalanash village were totally dismantled for scrab metal in 2015, and it does not exist anymore.

Nowadays we drive tourists further than Zhalanash, to Aqespe site.

There are still two big and two smaller boats laying along the sea.

09.00 Driving through Sexeuil village to hot spring (62°C), continue driving along the North Aral sea, visiting four last stranded ships along the shoreline (when its dry we drive via Zhalanash, former seabed);

Driving back to Aral.

Above mentioned places are located in northwest of Aralsk, and it really gives you impression of manmade disaster. When its dry we drove on the former seabed to ship graveyard, where you can see salt plains, cliffs (former shoreline), herd of camels and horses, wild shrubs growing on salty seabed and of course, seashells which still spread all over.

It usually depends on tourists, trip to above mentioned places take 7-8 hours. Some tourists, and especially filmmakers want to spend night in a fishing village, to see a daily life of fishermen, then we organize a homestay there.

Also possible to organize a daytrip to the biggest lake system in Aralsk region, Kamystybas and Kokaral dam. The dam is located 220 km south of Aral, mainly its interesting for journalists and filmmakers.

Dinner and overnight at guesthouse.

Meeting with a guide-driver at the train station and transfer to the Tauchik village. From there turn right. We move further along a dirt road in an easterly direction to see Torysh.

• Torysh stone balls valley is a geological wonder of the Mangyshlak peninsula. Balls are scattered at Mangyshlak in many places, but only in areas of Torysh the earth's surface is dotted with giant peas entirely up to 4 meters. Cars with difficulty struggle between stones. This area is a paradise for the photographer.

And the last wonder of this day is a beautiful Sherkala.

• Remnant of the mountain rises 300 meters above the surrounding plain steep walls. According to the degree of landscape attractiveness Sherkala well competes with the Monument Valley in Nevada. Not far from her full-flowing stream foot out of the sand implies, and after 500 meters again lost in the sands. A few meters from there located the excavations of the city Kyzylkala (the 10th century), through which the Great Silk Road has passed.

Overnight at the tent there.

From Sherkala our way passes along the autobahn 42 km to the railway station crossing Shetpe. Here we leave civilization for a long time. On the steppe road we reach 11 km to the ridge of North Aktau and descend into a wide gully between North Aktau and East Karatau. On the way we pass an ancient cemetery, from here you can see rocky cliffs of the Ustyurt plateau.

• Chink (break) of the Ustyurt plateau is one of the grandiose landscape spectacles on the planet. The chalky rocks are stretched here from the north to the south for 400 km. Basically, these are the precipitous slopes, where it is impossible to drive not only by car, but also to climb on foot. The lack of water sources for many kilometers makes this place uninhabitable. Here is the kingdom of eagles, mountain argali and turtles.

Near the Tuzbair natural arch we will stop for lunch.

Further our way passes 70 km along the salt marsh and sand before the ascent to the Ustyurt plateau to the Beket-ata underground mosque.

• Necropolis and underground mosque Beket-Ata - the spiritual, historical and architectural monument of the 18th century. It was built by the most revered man in the western Kazakhstan - Beket-Ata. As a Sufi, (Sufism - a mystical-ascetic trend in Islam, a kind of Islamic monks), he chose seclusion pristine desert land, forgotten by God - Peninsular Mangyshlak. Being a Master builder Beket-Ata has built four mosques on rocky spurs. First one was built in Kulsary area - it is called Ak-Mosque, the second in Cretaceous rocks in 20 km from Beyneu village, the third - in the area Tobykty and fourth underground mosque carved out in an array of Cretaceous rock promontory in tract Oglandy. Beket-Ata was born in the second half of the XVIII century near the village of Kulsary Atyrau region. 14 years old he came to bow to ashes of а Shopan-Ata, and received his blessing and mandate to study. He learned the science in Khiva.  Having reached the age of 40, he became a Sufi, and began to teach children to read and write. He healed people: someone who has come to him weak and suffering, was given health and vitality. When dealing with controversial issues, he showed wisdom, led both sides to an agreement. In his sermons Beket-Ata instructed believers to be fair and do good things. The saint remained in people's memory as a soldier too, who has showed feat in the battle with the Kalmyks. He possessed herculean strength and courage, as well as his great-grandfather - Eset-Batyr. Sufi Beket-Ata has not left in trouble those who turn to him for help. Beket ata has been remembered in the memory of the people as a prophet predictor, who has been as an open book. Underground mosque Beket-Ata in Oglandy area, which became his final resting place, in spite of the difficult access, is a place of mass pilgrimage. It is said that after visiting the grave of the saint and mosques believers recovers.

• Bozzhira natural boundary arranged in a straight line 28 km from Beket-Ata. However, to get to this extremely scenic cliff, we will have to overcome the nearly 80-kilometer loop on the road, dangerous cliffs, sudden gullies in the soil and marshy salt flats. But the cliffs are breathtaking. No wonder that on the 34th International Geological Congress in 2012 in Brisbane the photos of Boszhira’s Fangs were ranked first.

Overnight at Beket-ata pilgrim house or at a tent in Boszhira.

Drive from Oglandy to Shopan ata underground mosque - traditional place of pilgrim, who goes to the mosque Beket-Ata.

Further our path goes in a south-westerly direction along the picturesque chalk cliffs of the North Aktau. We pass at the foot of Bokty, which is like a giant cupcake, built of chalk colored rocks: gray, pink, and white. The photo of this mountain is placed on a modern banknote of 1000 tenge. On a gentle pass through the Karatau Ridge you can gather agate and cornelian. Through saxaul thickets along the sand dunes we will reach a Senek village. Our road crosses the deepest hollow of Central Asia and Kazakhstan Karagiye, its bottom lies at 132 meters below sea level.  Before the Karagiye hollow, we will briefly leave the road to make a panoramic photo of this place. The Karagiye hollow is the fifth deepest in the world.

In the evening we will arrive to Aktau. 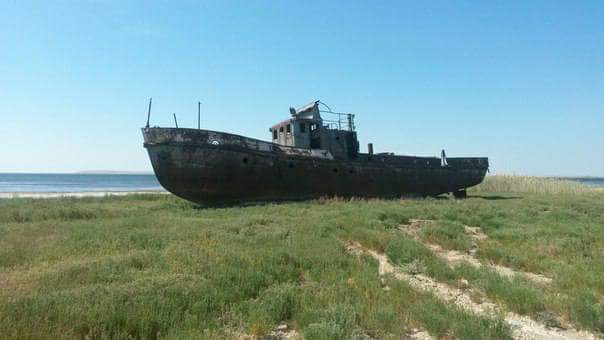 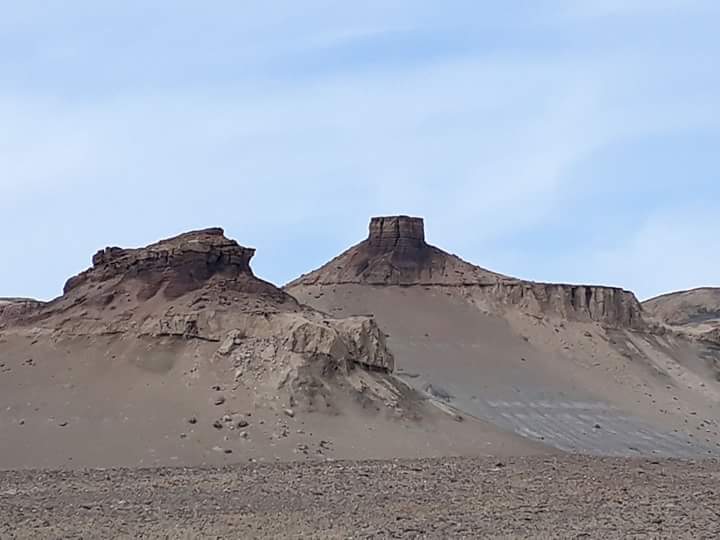 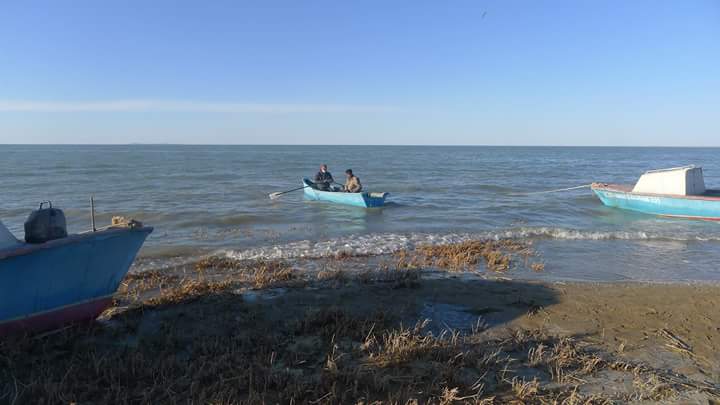 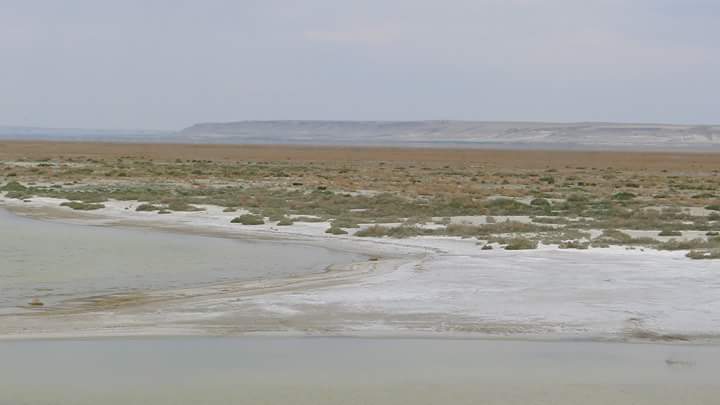 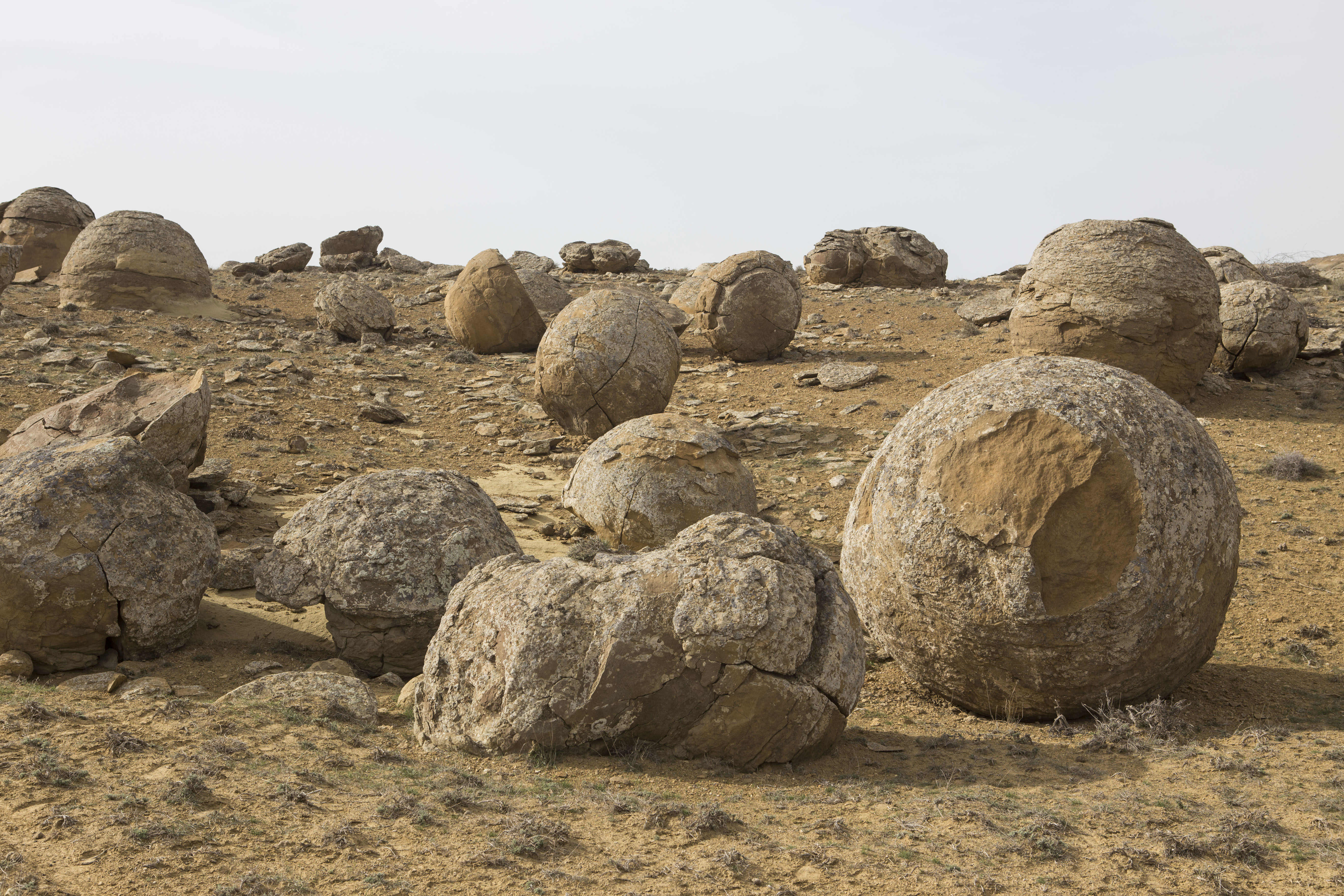 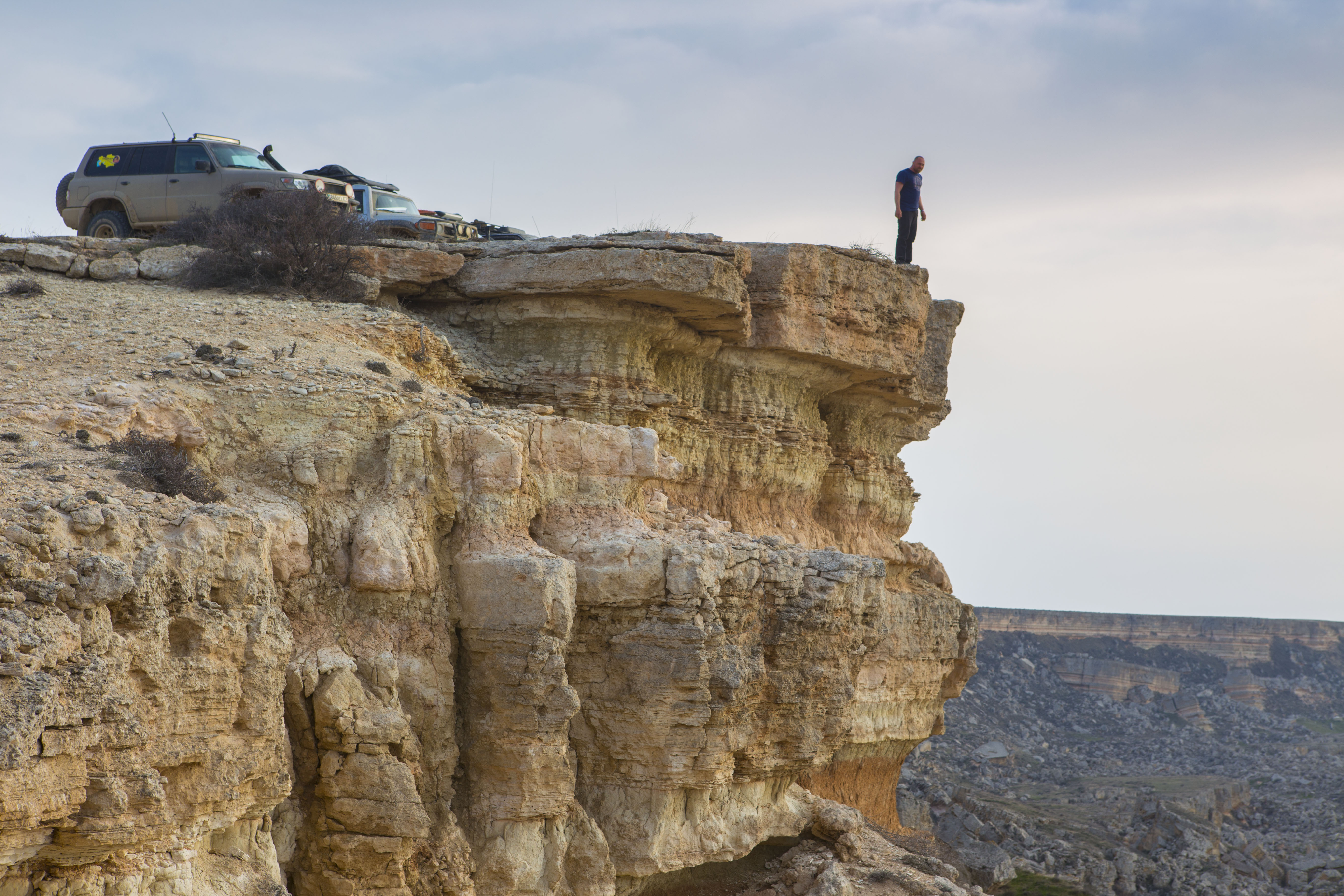 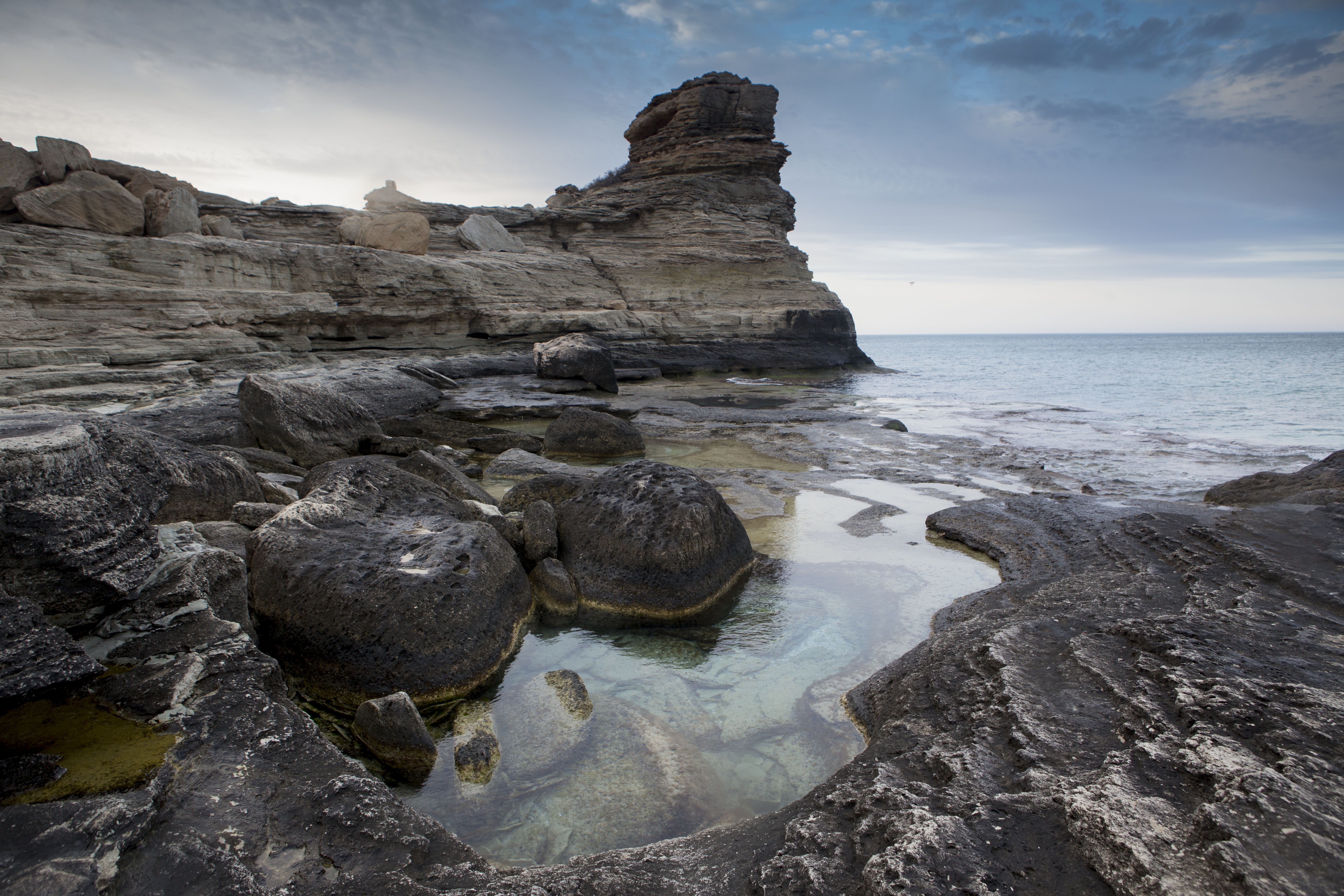 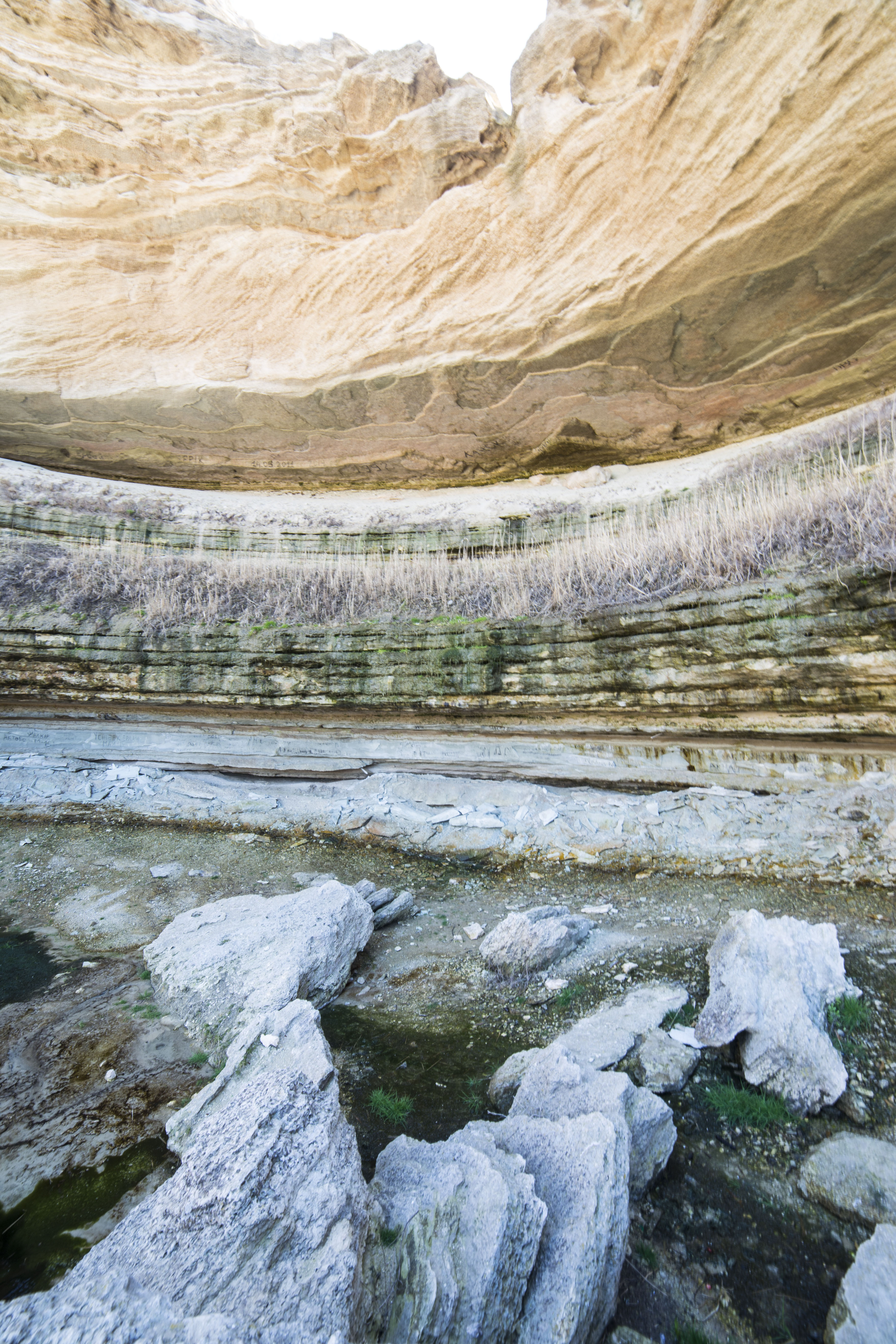 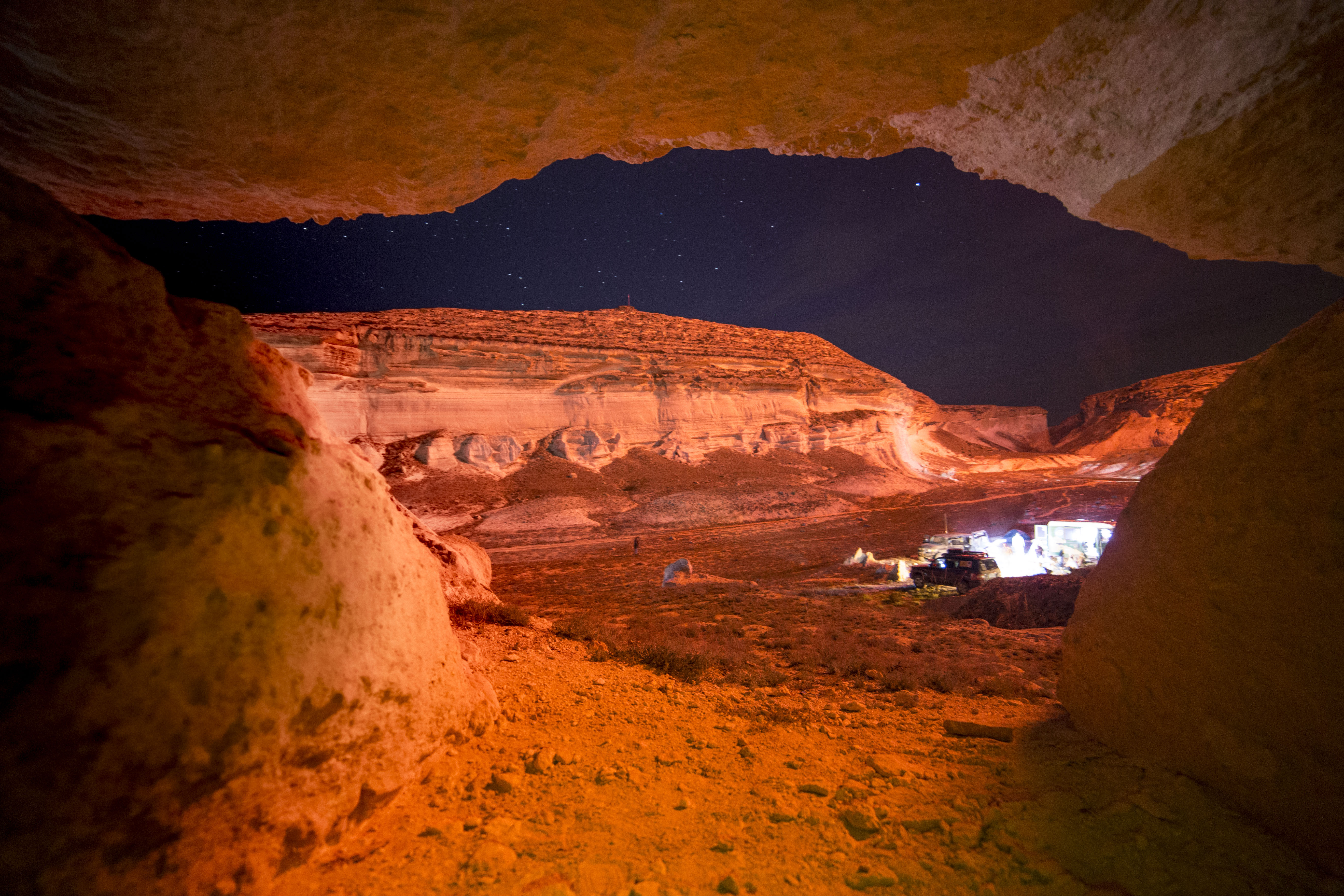 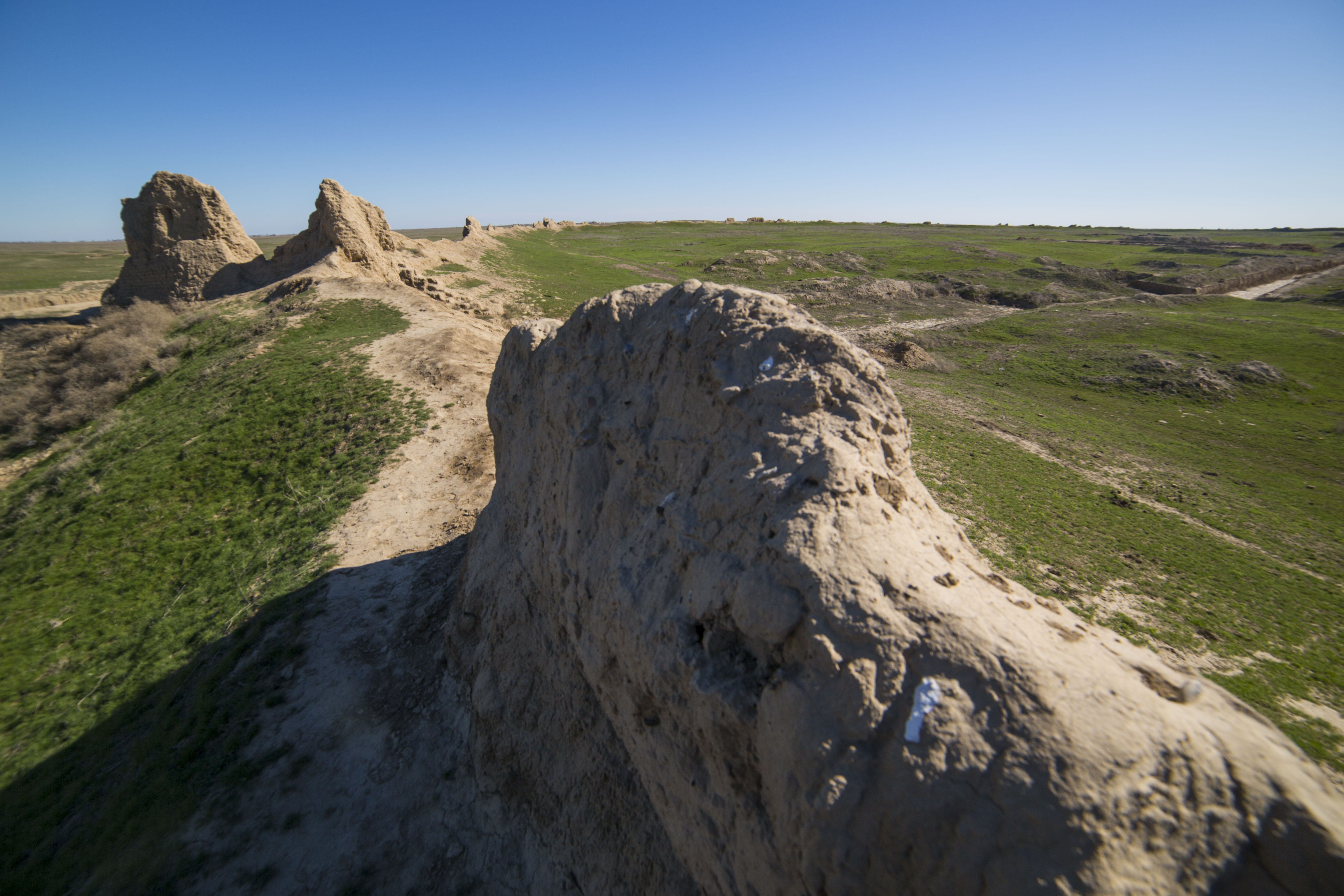 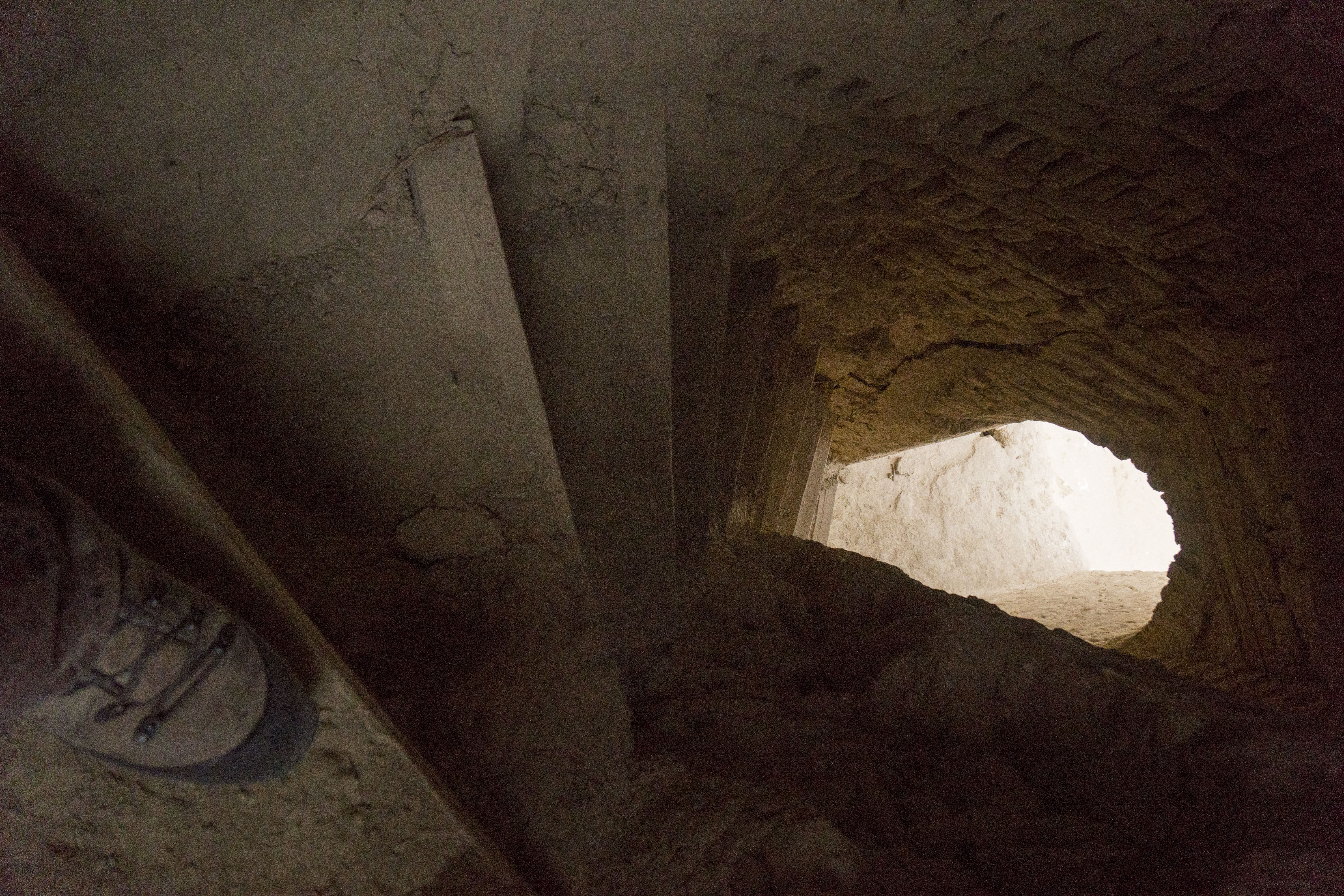